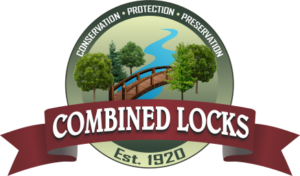 In the beginning it was Native American land. High on the bluff, across from the rapid, swirling waters of the little chute in what was to be named the Fox River, stood an immense and dense mass of hardwood trees. Trails criss-crossed through the tall, colorful timber that crowned the south shore of the river.

Here the Native Americans tapped the sturdy maples and set up their sugar camps; here they took the saplings from the oak, basswood, beech, elm, ironwood, or hickory to bend into the elliptical framework for their wigwams. The bark of the trees was used to make the large patch matting to cover the wigwam frames. It was here the Native Americans cleared small areas of land on which to plant and grow their corn, often near the sugarbush or cluster of wigwams.

In the bay at the foot of the high, wooded bank came the animals to drink–the deer, bear, fox, and smaller animals of the forest. Numerous sulfur springs in the area gave the Native Americans and woodland creatures a year-round supply of water. The creek tributaries of the Fox and the fast moving, rippling river itself provided the Native Americans with superb fishing. Here they caught the wily sturgeon, the fighting pickerel, pike and black bass in the swift running water. During the seasons of high water, the pike and pickerel were known to swim up the creeks for miles.

This was the scene at present-day Combined Locks when the first white man came to the land called Ouisconsin in the 17th century. The river became the highway for the fur traders and their voyageurs; it was used by the French missionaries the Native Americans named “the Black Robes” and welcomed into their villages. Eventually, the landmark bay on the south shore of the Fox River beckoned to its first settler and got its first name–Garner’s Landing.

Roland Garner (or Gardner), according to pioneer records, cleared and worked his farm on the hill in the 1830’s and 1840’s at the time the French from Canada were establishing homesteads in the present Town of Buchanan. These early fur traders-turned-farmers were Joseph, Charles and William LaMure, the Beaulieus and Porliers.

Then 10 German families plus a few bachelors came to the Landing to settle as a group in 1842. There were the families of John Dietzler, Peter Dietrich, Jacob Pauly, Michael Klein (or Kline), John P Heinz, PH Rausch, JP Schumacher, John Kloepfel, Anton Heuser, and the three young men, Mathias Klein, and John and Jacob Snyder.

The first Hollanders arrived in 1848, brought to the new country by the Reverend Theodore VandenBroek, missionary priest at La Petite Chute (Little Chute). He had worked among the Menominee people since 1836 and returned to his native land to recruit workers for the building of the canals on the river. He also saw in his journey a chance to offer freedom and the promise of a future to his fellow countrymen with the Fox River Development Company assuming all the expenses of the long journey.

While in Holland, the priest wrote so eloquently of his wilderness home in Brabant parish circulars that instead of one boatload of families ready to emigrate he found he had recruited two. This is how it happened that many Dutch families settled in Buchanan and the Town of Holland (Brown County) as an overflow to the original Little Chute settlement. Letters sent back home by the pioneers themselves brought more settlers. Among the earliest Netherlanders in Buchanan were the families named Berghuis, Hammen, Welhuis, DeBruin, Speel, Hartjes, Sanders, Kemkes, Williams, Beelen, Jansen, Van Ooyen, Coonen, Van Domelin, Timmers, Menting, Van Wyst, Smits, and Tillman.

The third large group of settlers, most of whom came as canal workers, were the Irish. Some married here and settled down; others sent for the families they had left back east while they worked to earn enough for a homestead and a new start. Records show the surnames of Ryan, Glasheen, Finnigan, Ringrose, Moffet, Collighan, Henchy, Hinchey, Luftus, Condon, Farry, Powers, Keating, Clune, Maroney and Maloney, Slattery, Leddy, Rohan, Davy, McGrath, Heardon, and Cooney.

Together these people of different culture backgrounds worked to build a strong farming community. Today, descendants of these sturdy pioneers still live in the village.

The actual Village of Combined Locks had its origin as a mill town, linked to the pioneer paper industry of the Fox River Valley. The farming community changed into a village when the present Combined Paper Mills, Inc was organized as the Combined Locks Paper Company in 1889. The first dam at this place in the Fox River, along with the original pulp mill buildings, was built that year.

Both village and mill were named for the combined boat locks that skirted the river shoreline. Small, tidy homes were built by the company for workers; these were located along the winding road in the eastern end of today’s village. The paper firm also built a frame boarding house type hotel for workers without family ties.

It was in 1916, when the original Combined Locks Paper Company was organized, that the idea of village incorporation got started. The village then was mainly on the east end of town and it had become a self-sufficient village that had outgrown its “mill town” image. Its leading citizens were aware of the mill’s flowering prosperity. They spoke out for incorporation as a means of keeping the industry’s tax benefits within the growing village. There always was a threat of annexation by neighboring communities.

Thus it came about that a petition for village status was sent to the Outagamie County Circuit Court April 21, 1920, all legally drawn up and signed. On the petition were the names of Herman Janssen, Nicholas Lom, Henry Maas, Theodore Van Cuyk, and John Van Cuyk.

Village records show that considerable preliminary work had been done before the petition was filed. A survey was made of the 810 acres for the proposed village; this included 705 acres of land and 105 acres of water. Albert E McMahan made that survey.

It was August L Beatz, paper mill foreman, who offered to count heads in the proposed village area during his off hours. This he did, walking from house to house to make the canvass. He came up with 467 persons in 74 families. This census included the August Mauthe family of six, the Mauthe’s ran the hotel, and the 13-room and board mill workers. His report read, “Said census exhibits the name of every head of a family and the name of every person or resident in good faith in such territory.”

The survey map and the census were both posted in the usual place for villager inspection. This was in the post office room in the home of Mrs. Peter Vanden Brant, village postmistress.

Three residents were against the incorporation move and said so, but their protests were turned down. Instead, the court authorized an election to be held on the next August 3. Inspectors were appointed by the court for the occasion. Named were Daniel J Ryan as clerk, Herbert J Sullivan and Theodore Williams.

Notice of the election was posted for the three weeks demanded by the court prior to the election. Handbills went up on the village “bulletin boards” of the day, well remembered by old-timers in the community.

The west wall of Mrs. Vanden Brant’s front parlor post office got one as did the south wall on the outside of the yard office at the Combined Locks Paper Mill. Various telephone poles in the community, located in strategic spots, also were used for notices. One went up on the pole in the front of the Christian Hartjes home that overlooked the river; another was tacked on the telephone pole east of John Doyle’s house on the road to Darboy; the pole near Malachi Ryan’s house got one because it was on the well-traveled Kaukauna-Menasha plank road. Another was posted on the telephone pole east of Paul Smith’s home on the road leading to the mill.

When election day arrived, the event was held in the schoolhouse (District 7 school later turned into the first St. Paul Catholic Church). The outcome was favorable for incorporation with 54 votes for the move and only two against it. The papers for incorporation were filed officially August 5, 1920, with the Secretary of State in Madison.

Less than two weeks later, August 16, at a 7:30pm meeting at the school house, the electors met again to pick a slate of village officers. This election was held again in the old school on August 31, 1920.

The first village board meeting was held September 8 at the school house, where the village fathers were to meet the last Tuesday of every month until the Village Hall was built in 1924.

The first tax rate for the village was set at 12 mills or $12 per $1,000 in a day when hand labor brought a man 35 cents an hour and a man plus his team commanded a high 75 cents for every hour he worked.

The village certainly has grown over the last eighty years and continues to grow. As of January 2002 there are approximately 2,552 people living in Combined Locks with approximately 1,000 homes. The founding fathers used great insight in establishing this village.

History information taken from the “Golden Jubilee” book that was published in 1970 to celebrate Combined Locks’ 50th birthday.